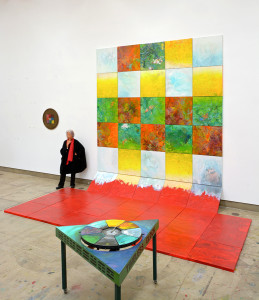 LA Artcore is pleased to present a solo exhibit by Los Angeles artist Diana Wong whose painting and sculpture has evolved to incorporate abstraction and representation that is fundamentally rooted within the parameters of the I Ching, the ancient divination text comprised of nine trigrams within a labyrinth-like structure that has become Wong’s main source of subject matter. Born and raised in Hong Kong, Wong was encouraged by her family who instilled an early education in calligraphy and eventually as a teenager sought out her arts education through the two private arts schools that offered drawing and painting programs. It was here that Wong was exposed to Impressionism, whose flourishing use of color and gesture profoundly impacted her. After graduating from high school Wong entered the Academy of Fine Arts in Rome, Italy while also apprenticing with several master painters before where she developed techniques in the classical realism style and formed a solid base for her later development. It was in London thereafter that Wong decided to break from the mores of academic painting to pursue being a professional artist. Back in Hong Kong, Wong began exhibiting regularly and through special circumstances came to Los Angeles in the mid-seventies. Here, Wong found a sense of possibility in a place whose artistic code seemed largely unwritten. In her monograph entitled, “Merging” Wong explains, “Like a turn in the Labyrinth, a new path had opened in front of me…”.

Combining her interests in astronomy, physics, music and the I Ching,

it was in her beginning years in California that Wong first incidentally broke into abstraction, while painting landscapes that explored color and geometry. Wong continues, “Spontaneity rises from zero, in the pool of emptiness with infinite possibility….requiring freedom from one’s own thoughts and judgments of right or wrong.” Lately, Wong’s attention has been turned to nature and the effects of climate change. Through her I Ching readings, Wong has been observing an impending doom but also great opportunity. It is this delicate balance of opposing forces that has kept Wong’s career and outlook invigorated. She will exhibit a ten by twenty-foot painting as well as a fifteen-minute video entitled “All Season’s Become One”, directed by Shannon Michael Terry, that addresses not only the delicate subject of the environment, but also an overall observation of balance implicit in her work.