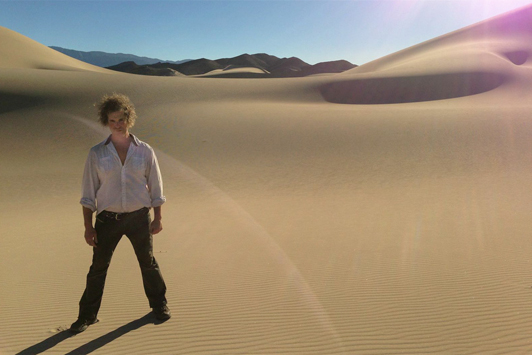 This film isn’t a biography of an artist, as you might expect. It is an audiovisual journey with no dialog, a film inspired by a painting. The painting, All Seasons Become One by Diana Shui-Iu Wong contained an already complete idea within it, which had so much to offer that it compelled me to expand it into a moving format.

The project began when I was commissioned to compose music for a live performance based around the painting. The performance for the large 10 by 20 foot modular canvas addressed humanity’s relationship to nature and our connection to the source of creativity. The painting acted as a conceptual storyboard for the film. After negotiating how to represent the symbolic elements, I adapted the artist, Diana Shui-Iu Wong’s concepts, which challenged me to find practical solutions in translating between the mediums of painting and film. Can I extract the painting out into the concept of a film? Can I achieve the story arc present in the paintings concept? By limiting as much as possible the way the story could be told, we get minimalist results, making room for the viewer’s own perceptions.

Born in Los Angeles, Shannon is as a multi-disciplinary artist with a background in the visual arts, film, music and sound. As a multi-instrumentalist, Shannon’s main instrument is the Array Mbira, a 120-note instrument that combines the metal plectrum of an African Mbira and the Tetraktys, a mathematical idea and metaphysical symbol that embraces principles of the natural world and Cosmos.

In 1996, he was featured as an overtone singer for the documentary, Quest for the Secret Chamber, where he traveled to Egypt to sing and record in the Great Pyramid of Cheops. In 1998, as resident composer of the Bureau of Arts and Culture in Los Angeles, he began to explore the relationship between visual art, sound and music, creating original compositions for art exhibitions. In 1999 Shannon created the Open Door Orchestra; a revolving ensemble of players from around the world that utilizes an array of instrumentation and eclectic influences. Shannon is a member of the Earth Action Artists, promoting environmental awareness thru art and music. For this group he composed the music for Awakening, a multi-media air ballet performed at the Earth Summit meeting in Buenos Aires in 1999.

In 2014, Shannon established Primal Future Now Films to develop audiovisual works focused on art, music and culture. For PFN Films Shannon has recently wrapped, All Seasons Become One, An unconventional narrative: driven by music and sound, inspired by the work of artist Diana Shui-Iu Wong.